Pelago Bicycles was kind to sponsor us with a bike for our CO2-free folk music tour in Finland. Sponsoring is nice, but it is even more nice to get some honest feedback, so here we go. 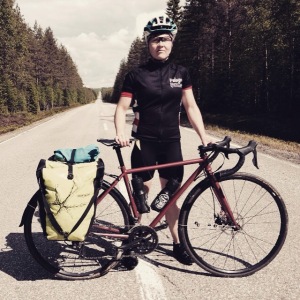 Our Sibbo was size 50 (XS), model 2014, with Shimano Ultegra 11-speed drivetrain, Avid BB7 disc brakes and Pelago’s own finishing kit. We rode it for about 4200 kilometres, most of that with heavy panniers (25+ kilos). Weather was nasty and tarmac was rough, and we also grinded several hundred kilometers of gravel roads. After all that we think we know how the bike took the beating.

Pelago says that ”Sibbo is a lightweight and versatile road bicycle”. That is not correct. Sibbo is not lightweight nor a road bike. It is an excellent, versatile frame built for light touring.

For commuting we prefer a straight bar frame. For road we prefer something lighter. But Sibbo’s frame seems to be made for light touring, with mounting points and room for full fenders, rear rack and big tires. And it has got a very tough character.

Made of double butted Columbus Thron, Sibbo is a sturdy bike, especially in small size with short main tubes. The frame and fork combination is heavy compared to carbon and alloy competitors, but Sibbo is also very stiff, which is good when riding fast on rough roads with a heavy load. For panniers we used Pelago’s own Commuter steel rack, which was as sturdy as the bike – a very good option.

The fork looks nice but as a straight bladed steel fork it is not the most comfortable we have used. But it does not bend when braking, and the bike goes where you point it, even on rough downhills. And you can park the bike however you want and not worry about something damaging your carbon in the middle of nowhere. Steel is a good material for touring, if you calculate the risks.

To release the frame’s full potential it might be a good idea to have low rider mounting points in Sibbo’s front fork. We also did not like the horizontal rear dropouts – they add versatility but make it difficult to take off the rear wheel with full fenders.

Sibbo’s geometry felt stable, and after many hours in the saddle we appreciated the safe feeling on the bike. Still, it is difficult to review the geometry of such a small size bike, or compare it to a bigger size. Angles, wheelbase and weight distribution change according to the size. But for XS Sibbo, Pelago has done a good job to make such a short bike feel so stable.

Sibbo’s paint is of excellent quality. After all the beating there are no chips at all.

For starters we made some modifications. Sibbo is specced with an oldfashioned ergo handlebar, which we swapped for a contemporary short reach, shallow drop compact bar. It offered more good hand positions and it made the bike look a lot better. We wonder why Pelago sticks to its old ugly bars. As a design oriented company they should know better.

We also swapped the saddle and seatpost. There was nothing wrong with the saddles Pelago offered us – Brooks Cambium and Pelago’s unbranded – but due to long kilometers ahead of us we took our own, trusted saddle, and it happened to be already attached to a lightweight carbon post.

In 2014 Sibbo still had 25 mm Schwalbe Durano tires. They are too narrow for Sibbo’s character and even look rather anorectic on it, so we put some 28 mm Gatorskins on. This year Sibbo has got proper 28 mm Duranos – a good move.

The wheel’s were Mavic Cross Ones. They stayed true all the way, with no problems in the freewheel or bearings. Good quality, trustworthy touring wheels, enough said.

Shimano’s Ultegra 2 x 11-speed shifting was fast and flawless in the rear but only decent in the front. We did not have to adjust the rear deraileur at all, but in front we had some issues with chain dropping and lazy shifting. It got better with adjustments, but the reason may be Sugino’s crankset. It looks nice but is not as refined as Shimano’s Ultegra would be.

In 2015 Sibbo will have Shimano 105 gearing, but the Sugino crankset remains.

Sibbo’s gearing range (46/36 – 11-28) is wide and steps between gears are small, which is nice for rather flat Finnish roads. We would still advice Pelago to consider 1 x 11 -setup, maybe with 42 in front and 11-36 in back. It would make the bike look sleeker, and the gearing range would be quite enough for Sibbo’s intended use.

Remarkably, Shimano Ultegra chain showed no signs of stretch, when measured after the tour.

On test tours we used another bike with cantilever brakes. They were scary as hell compared to Sibbo’s excellent disc brakes. We advice anybody intrested in their own safety to invest to discs when touring with a load. Sibbo’s mechanical discs (Avids in 2014, TRP Spyres in 2015) are a good compromise – not as easy to maintain as hydraulic discs, but a lot cheaper and using techology that is possible to repair in the middle of nowhere.

We had no issues with pad wear, even when riding in foul weather on gravel roads.

On the tour we had zero techical issues with Sibbo, except a few flat tires caused by snakebites and (our own) worn out tires. That is excellent achievement, considering heavy use and occasional lack of maintenance.

To know Sibbo’s full potential we would like to take off fenders and racks and try it on cyclocross, our favored discipline. The stable geometry might be good for high speed curves and rough singletrack, and there is plenty of room for ’cross rubber. We have seen a few Sibbos raced hard in the local ’cross scene.

As such, Sibbo is a sturdy little bike with quality parts on it. Not a lightweight race steed, but rather a workhorse that gets anything done with ease. And we have to say that Pelago’s interest in good design has inspired us all the time we have ridden our Sibbo. It looks very good, with a perfect balance of contemporary technology and classic lines.